Despite post-9/11 security concerns, the U.S. has not gone the e-gate route. One reason is that the vast majority of U.S. travelers fly domestically. In Europe, there are many more borders to cross. “Every airport in Europe is essentially an international airport designed with border control in mind,” says Acuity’s founder Maxine Most. “The vast majority of U.S. airports weren’t designed this way.”

However, changes appear to be in the works for border control in the U.S. A few years ago the U.S. introduced its Global Entry initiative that relies on kiosks as a form of automated border control. The kiosks enable expedited clearance for pre-approved, low-risk travelers upon their arrival in the United States.

The kiosks differ from e-gates in that e-gates are globally interoperable, whereas only registered Global Entry travelers can use the kiosks at select airports.

For U.S. citizens using the kiosks, the traveler places a passport or green card on the kiosk reader, which also collects fingerprints and compares that information to the information collected when the person enrolled in the Global Entry program. If there’s a match, the person receives a slip of paper, can then bypass the customs and border control officers, and go straight to the baggage claim.

In addition to the Global Entry kiosks, some airports are introducing kiosks that can read e-passports held by people from other countries. For example, Unisys this year has been deploying a facial recognition system that can accept biometric information from e-passports at John F. Kennedy International Airport in New York and Dulles International Airport in Washington, D.C.

Though the company has no e-gate installations in the U.S., Vision-Box has deployed more than 400 automated passport control kiosks to simplify the inbound immigration process at about a dozen large airports. Travelers scan their passports, fill out an immigration questionnaire and have their pictures taken and biometrically verified against the photos stored in the passports. Some of these travelers also have their fingerprints taken and verified.

These kiosks share many of the same hardware and software components as e-gates, but are packaged in a different form factor, Petrov explains. He says that e-gates are not used in this instance because the U.S. requires face-to-face interaction of travelers with immigration officers, forcing Vision-Box to adapt the configuration of its system. 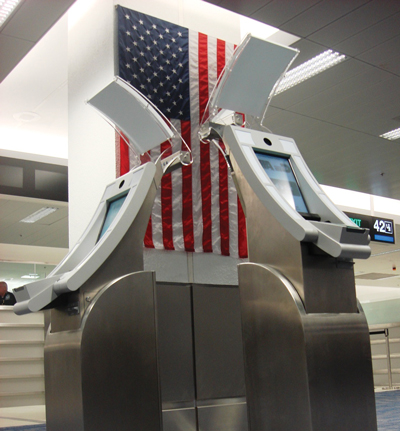 Because the U.S. requires face-to-face interaction of travelers with immigration officers, the use of e-gates is not yet common

The e-gate market continues to grow, although it hasn’t expanded as quickly as initially projected, Most says. “There hasn’t been significant growth in the past couple of years beyond the fact that the EU and Germany committed to putting in large numbers of e-gates,” she says. Europe is in the middle of a testing phase, however, and she suspects that once complete, airports are likely to add more gates.

The Acuity report states that following a spike in demand for e-gates in 2014, deployment should level off to a sustainable level by 2018 as other forms of automated border control, such as kiosks, take up more market share.

Early adopter Australia is on its third generation of e-gates, and every five years the country plans to enhance or modernize what it’s doing as faster readers and new methods come into place.

Hartmann says more countries are moving to a kiosk approach because passengers are becoming more familiar with kiosks through the check-in process. It’s also a much less expensive option than an e-gate.

“So you have a higher level of security, but you don’t have the inconvenience of barriers and additional steps in the process that people have to go through,” Hartmann says. “As we continue to move forward, things are becoming much less inconvenient for people.”

Petrov believes that five years from now, the trend will shift toward the integration of automatic and manual immigration checks. Initial traveler data could come from smartphone apps, registered traveler programs or previous trips, and that information would be verified at various stages of the trip. When travelers are securely known throughout their entire journey, the border control mission will be fully realized.