The 2017 Women In Biometrics Awards program is now accepting nominations for biometric’s industry execs, standards creators, researchers, issuers/security practitioners, and other leaders. Nominations will be accepted through September 29th. Click here to nominate a colleague, a client or yourself.

“Diversity in the security industry is not a new problem, whether you’re talking about women or minorities,” says Don Erickson, CEO of the Security Industry Association (SIA). “In this awards program, we saw an opportunity to showcase the best and the brightest in the biometrics field who happen to be women.”

The Women In Biometrics Awards is now in its third year. It’s co-presented by SIA, the leading trade association for global security solution providers, and SecureIDNews, a leading biometrics and identity industry publication. Sponsors include OT-Morpho and PSA Security Network.

In this awards program, we saw an opportunity to showcase the best and the brightest in the biometrics field who happen to be women

“Biometric technology is absolutely one of the top two or three growth areas for the security industry,” Erickson says. “As someone who uses biometrics for banking and healthcare and other applications, what I see in security is a lot of different manufacturers adopting biometrics – particularly the area of identity management.”

The idea for the awards program was hatched at an industry conference several years ago as colleagues ruminated how biometric technology was coming into its own and the industry was maturing. 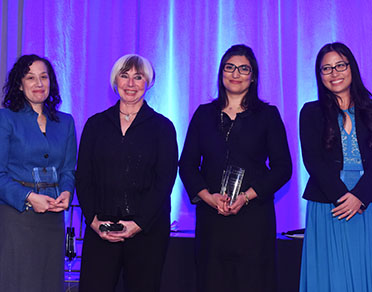 “It came up in conversation that there have been so many women who’ve contributed significantly to the growth of the industry – and how many of our end users at big government agencies and big corporations were actually females driving some of this technology growth,” says Chris Corum, executive editor of Secure ID News and a founder of the Women in Biometrics Awards.

“There are a lot of perceptions that leading technologies like biometrics are really male-dominated industries. While that’s probably true, some of our greatest technical breakthroughs – some of our greatest companies – are led by females,” Corum says. “So we decided that it was really important to recognize this and hopefully encourage others to get involved in this technology and other technologies.”

Winners of the 2017 Women in Biometrics program will receive their awards in Manhattan on November 15th at the SIA Honors Night during the ISC East event, alongside other internationally recognized security industry honorees.

“To encourage younger women getting into STEM and into the workplace, I think programs like this are really valuable,” Corum says. “The awardees are picturing themselves like a graduating class that has ties with the other classes who have been nominated and awarded in the past. It’s a really neat community that’s developing around the awards.”

Women in Biometrics Awards call for...