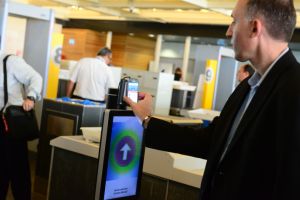 Some Air France frequent flyers are getting six months to test near field communication (NFC) technology. A few hundred invited passengers will breeze through the Toulouse-Blagnac Airport using smart phones with NFC as boarding passes.

It’s the first time for a trial from the airport entrance all the way through boarding. SITA, a specialist in air transport communications and IT, has done similar work in Toulouse and the Schiphol Amsterdam Airport.

The pilot is a team effort:

The process begins when the passenger checks in online and opts to receive the boarding pass via mobile. An NFC boarding pass is automatically sent in a three part sequence: the data is sent from Air France to SITA in a generic format using the Boarding Pass API; SITA adapts the data and sends it to Orange through a Trusted Service Management infrastructure; Orange sends the BP data with an SMS that is not visible to the passenger but processed by the smartphone.

The passenger sees a pop-up window when the boarding pass is received on the smart phone, which is stored on the SIM card and can be seen with the Air France Touch&Pass app.

When entering the airport lounge, the agent invites the passenger to tap the smart phone on the reader to validate access to the lounge.

At the boarding gate, the passenger taps the phone on the reader, and the data is read automatically and validated by the airport system. A green light appears, and the passenger can board the plane.

The trial runs through the end of the year.