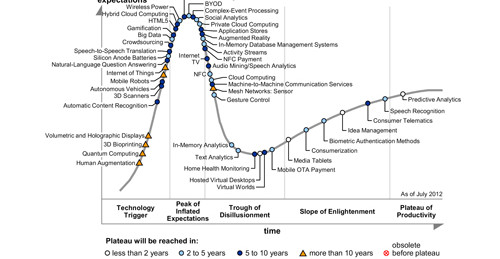 Research firm Gartner identified NFC payments as one of the fastest moving technologies in its 2012 Emerging Technologies Hype Cycle, an annual report that assesses the maturity, business benefit and future direction of numerous high-impact technologies.

In last year’s Hype Cycle, Gartner placed NFC payments at the very peak of the “Inflated Expectations” curve–occupied now by Bring Your Own Device. 2012 finds NFC “moving noticeably” along the curve, followed closely by NFC payments. However, the research firm expects NFC payments to be five to 10 years away from mainstream adoption, i.e. the “Plateau of Productivity,” while NFC in general still has two to five years to go.

“The theme of this year’s Hype Cycle is the concept of ‘tipping points,'” said Hung LeHong, research vice president at Gartner. “We are at an interesting moment, a time when many of the scenarios we’ve been talking about for a long time are almost becoming reality.”

One of these scenarios outlined in the report, “What Payment Could Really Become,” places NFC at the center of a completely cashless society. According to Gartner, a world in which every transaction is electronic would provide enterprises with efficiency and traceability, and consumers with convenience and security.

In another scenario, “The Human Way to Interact With Technology,” Gartner points to NFC as a “stand out tipping point technology” for enabling people to interact “more naturally” with technology.

NFC is joined by 3D printing, activity streams, Internet TV, cloud computing and media tablets as the other fastest emerging technologies in 2012.

NFC payments at peak of GartnerR...