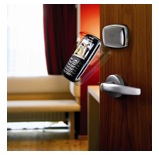 VingCard, a hospitality security provider and part of the ASSA ABLOY Hospitality Group, announced that Signature RFID by VingCard, featuring Near Field Communications cell phone compatibility, will be exhibited in Guestroom 2010 at HITEC 2008, June 17-19 in Austin, Texas.

Signature RFID/NFC is a system that enables hoteliers to offer contactless locks to guests. The locks operate on an open-platform system compatible with ISO 14443A/MIFARE, ISO 14443B,ISO 15693, and also the NFC secure transaction platform, which enables hotel guests to use NFC-enabled cell phones in lieu of keys or keycards.

Hotels equipped with Signature locks can offer remote check-in to guests with NFC-enabled cell phones. Prior to arrival at a hotel, guests receive a booking confirmation number, room number and encrypted room key access code through SMS text messaging that enables them to skip the check-in line upon arrival and go straight to the room, where the mobile device will unlock the door. Guests use their cell phones again at the end of their stay to check out directly through the NFC-enabled TV in the room, or the NFC-enabled hotel kiosk.

The 2008 version of Guestroom 2010, a model hotel room featuring the latest hotel technologies like Signature RFID/NFC, will be unveiled on June 17 during HITEC at the Austin Convention Center.