After a career spanning more than three decades in biometrics, Liane Moriyama retired last summer as Administrator of the Hawaii Criminal Justice Data Center, which falls under the Department of the Attorney General.

Moriyama was part of the team that brought the first Automated Fingerprint Identification System (AFIS) to Hawaii in 1990. She helped do away with “burdensome and ineffective” manual fingerprint cards.

She helped bring the first Automated Fingerprint Identification System (AFIS) to Hawaii in 1990, ending the reliance on “burdensome and ineffective” manual fingerprint cards

“We linked the two systems digitally, electronically, and created a lights out scenario for processing all of our arrests,” Moriyama says. “That changed the whole complexion of criminal ID processing in the state of Hawaii because it became quick – much more accurate with a handshake between the demographics in our criminal history system and the fingerprint technology in our AFIS system.”

Moriyama helped bring facial recognition technology to Hawaii’s law enforcement agencies in 2013. The system can link different crimes together through facial matches as well as search for missing and wanted persons using a photo.

Moriyama says she is most proud of making the crossover between criminal justice and non-criminal justice communities by using biometrics to help keep vulnerable populations safe through background checks. She also helped usher in the modern sex offender registration system for the state of Hawaii. 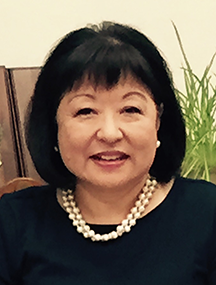 “My background has always been in IT – and IT as it relates to criminal justice. We realized that we needed to help the non-criminal justice communities by using the technology and the biometrics (to protect) our vulnerable populations, our children, our disabled and our elderly through licensing and background checks. That really does protect the common citizen, and the culmination of all of that is when I was elected chair of the National Crime Prevention and Privacy Compact Council. I served two terms as the chair nationally and we have made tremendous strides in keeping the vulnerable populations safe.”

Moriyama’s education began in mathematics. But she learned plenty from the criminal justice information processing side. “When you see the impact that you can make on the systems that we bring up that are used by the general public, it keeps you motivated,” Moriyama says. “You see the difference you can make in government, and it can be significant.”

The 2017 Women In Biometrics Awards will honor five recipients in Manhattan on November 15th. The awards will be given at the SIA Honors Night ceremony during the ISC East event.