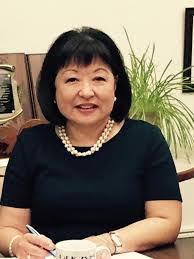 Liane Moriyama was part of the procurement team that brought the first Automated Fingerprint Identification System (AFIS) to Hawaii in 1990. She brought an IT perspective to the process while learning about fingerprints from other experts on the team. “It was a watershed moment for me as I’ve made a career in criminal justice identification and information since then,” she says.

Since 1992, Moriyama has been the administrator for the Hawaii Criminal Justice Data Center under the Department of the Attorney General. She previously served as assistant administrator and Systems Support Analyst. During her tenure at HCJDC, the paper-based biometrics that law enforcers once relied upon have matured into digital finger, palm, and face data.

Moriyama was at the helm when facial recognition technology was brought to Hawaii’s law enforcement agencies in 2013 and when the Hawaii Sex Offender Registration Mobile App was released free to the public in 2014, allowing any user to locate workplaces and homes of registered sex offenders. The app was awarded Best Information Services Mobile App by the National Web Marketing Association.

“I think it would be the moments when I made the crosswalk between criminal justice and non-criminal justice communities by using the technology and expertise in the biometrics industry — AFIS, fingerprints, DNA, etc. — to assist in keeping our vulnerable populations, such as children, disabled and elderly, safe through background check processes. The culmination of this effort was my election to two terms as the Chair of the National Crime Prevention and Privacy Compact Council.”

This is the second annual Women in Biometric awards. The eight finalists will be profiled in the coming week and the winners will be presented on Wednesday, Nov. 16 during the Security Industry Association’s “Honors Night: Celebrating Performance, Partnerships and People in the Security Industry,” held in conjunction with the ISC East event. Women in Biometrics Award winners will be honored at the event along with other distinguished security industry award recipients.