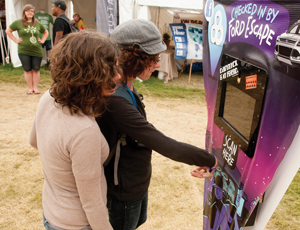 Contactless ticketing catching on at festivals

The Bonnaroo Music and Arts Festival sold more than 80,000 passes to the four-day event in Manchester, Tenn. Bonnaroo is different from other multi-day concert events because attendees camp out at the site.

Instead of issuing tickets and scanning bar codes, Bonnaroo tickets were wristbands containing 13.56 MHz contactless chips that concertgoers used to gain access to the grounds and related venues. This was the second year Bonnaroo used the wristbands for access and this year added social media features as well, according to Chad Issaq, executive vice president for business development and partnerships at SuperFly Marketing Group, which produces the festival.

Bonnaroo is just one of many music festivals and events that have started using contactless technology for ticketing, social media updates and even in some cases payments.

Of the 80,000 tickets sold, some 74,000 individuals went online before the event and personalized the wristband with social media information, Issaq says. Bonnaroo enticed fans to customize by entering them for drawings to win VIP upgrades, merchandise packages, escort to the front row and other prizes.

More than 200,000 check ins were recorded using the wristbands at different stages and venues, Issaq says. Locations near each stage and venue enabled individuals to tap to automatically update Facebook status indicating that they were at a certain stage seeing a specific performer. At the end of the day the individual would have a summary of the day posted on Facebook.

The concertgoers’ friends could click on the events to access the playlists of the specific artists, listen to the songs on Spotify and with receive a free 30-day subscription to the streaming music service, Issaq says.

Event promoters are considering expanding the wristband’s use to include a payment application for the 2013 event, Issaq says.

Using the wristbands, an online audience of 2 million was generated as ticket holders linked their bands with Facebook to check in and post photos from the party locations. Produced by sportswear provider Adidas in collaboration with Sparklestreet, the events welcomed celebrities, VIPs, competition winners and Olympic medalists to pop-up venue “Adidas Underground” in East London.