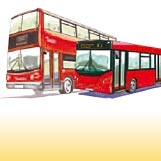 Transport for London (TfL) has celebrated its first successful year of accepting contactless payments cards on all of the Capital’s 8,500 buses.

Since it was launched in December 2012, more than 6.5 million journeys have now been made using an American Express, MasterCard or Visa Europe contactless payment card. Usage continues to rise, as an average of around 33,000 bus journeys a day are paid for using the debit, credit or charge cards; with around 1,300 new cards tapped each day.

Acceptance on London Underground, London Overground, DLR and trams will launch next year when London will become the first city in the world to fully integrate contactless payment cards into the fare system.

A controlled pilot on London Underground, London Overground, DLR and trams will take place over the next few months to test the system, including additional customer messages, to rectify any operational issues before the full launch.

TfL continues to remind customers about presenting their Oyster or contactless payment cards separately to the yellow card readers to ensure the right card is charged for the journey. This message has been widely published at bus stops on the real-time information displays, via emails to customers and through the media.

Since launch refunds requests for the incorrect card being charged have averaged less than three per day, out of around 4 million daily bus journeys paid for on Oyster. There have been no technical issues since the system launched and TfL continues to work closely with the payments industry to prepare for the next phases.