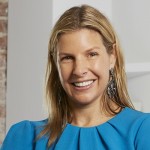 Caryn Seidman-Becker started her career as a risk arbitrage analyst in the early 90’s. At the time, mergers and acquisitions (M&A) were prolific in the defense and aerospace industry. “That began my long history of investing in the industry,” she says. “But 9/11 intensified my focus and appreciation for all the technology that could make a difference in the future.” She viewed biometrics as the key to linking enhanced security with a better consumer experience.

Seidman-Becker attended the University of Michigan hoping to be a sports journalist. Instead, she went to Wall Street to invest in mergers and acquisitions as well as distressed and bankrupt companies. She then became a value investor in the asset management industry. “Ultimately, I wanted to take the lessons I learned from the best and worst management teams I invested in to build a sustainable business that could make a difference in the world,” she says. “That mission led me to CLEAR.”

CLEAR offered an expedited way for airline passengers to get through airport security. But the company floundered and went bankrupt in 2010. Seidman-Becker  led the acquisition of CLEAR with other partners — such as the president and CFO of CLEAR Ken Cornick. She helped lead CLEAR out of bankruptcy and started guiding its relaunch with a focus on building a Secure Identity platform. “This platform’s capabilities cross many industry verticals with the potential to be a universal key to a secure and frictionless world,” she says.

“My proudest accomplishment in business is bringing CLEAR to where we are today – 20 airports across the country by year end and sports stadiums, over 400 employees, and transforming how CLEAR members work, live, and travel. We are fulfilling our mission to strengthen security and delight customers.”

CLEAR turns users’ fingerprints and iris images into their identification, helping them move quickly through security lines. CLEAR is expanding its biometric platform across various industries and has plans to allow third parties to implement the company’s biometric technology into their businesses.

This is the second annual Women in Biometric awards. The eight finalists will be profiled in the coming week and the winners will be presented on Wednesday, Nov. 16 during the Security Industry Association’s “Honors Night: Celebrating Performance, Partnerships and People in the Security Industry,” held in conjunction with the ISC East event. Women in Biometrics Award winners will be honored at the event along with other distinguished security industry award recipients.